Aging  Of  the  eyelashes 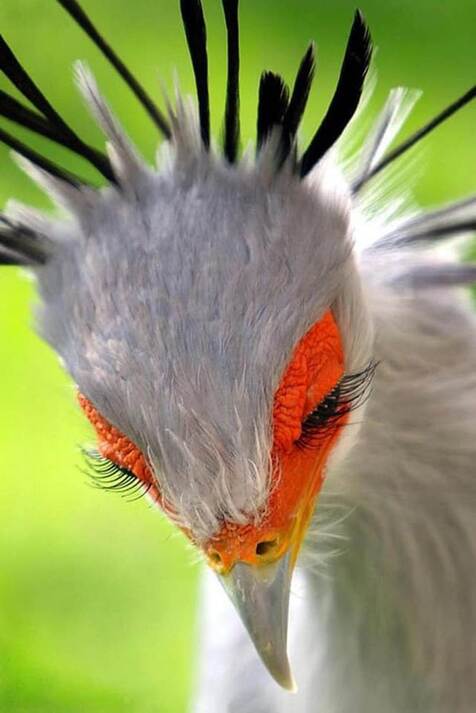 Everyone loves beautiful long lashes
The Secretary Bird (Sagittarius serpentarius) of the African Savannah may have beautiful lashes but it hunts its prey on foot, and at 4 feet tall, can be an intimidating sight: beware the beauty that beckons you uninvited......

Analysis of the eyelashes

These two photographs above also illustrate, in vivid detail, the difference between the youthful eyelid and periorbital area and the "older" eyelids: fullness of the sub-brow area, a gently arched brow, the tail of the brow is higher than the head, long eyelashes, a firm but low skin crease, healthy fullness of the upper eyelid, a bright appearance of the cornea which is accentuated by an open eyelid, lack of hooding of skin onto the eyelid, absence of or minimal crow's feet, firm lateral canthus, long horizontal eye aperture, smooth lower eyelid skin which blends into the cheek, lack of blemishes

How does aging affect eyelashes?

"Well, the last time I had a picture taken I could hardly see my eyes because of the weight of heavy eyelid. Then I paid attention to how I was actually using my eyes and I really noticed when I was looking at anything especially the computer I was straining my forehead to see better. Since I have had it done I no longer have to lift the forehead and tilt my head to see. It is amazing! I love..."  D. Rock  63 Yrs Old with Fat Droopy Eyes - Salt Lake City, UT

how do lower eyelids age?

The same may be said of eyebrow hair, which often suffers the ignimony of having been aggressively plucked with youthful exuberance. ​

Why do eyelashes become less dense and thinner with age?
A: Eyelashes grow from lash follicles. Age and changes in oestrogen make the follicles weaker, leading to lighter, thinner, shorter and less dense eyelashes. The reason why eyelashes look their best up to the age of the mid-30s is because of the ideal oestrogen levels up to that age.

Can diet affect the growth and appearance of eyelashes?
A: People on a poor diet and drug addicts have shorter and brittle eyelashes. So diet definitely affects the health of eyelashes. It is thought that a balanced diet containing protein and biotin and vitamin-rich fruits are best for eyelashes. Nutrients and essentials like vitamin C, vitamin A, omega-3 acids and iron are best obtained from citrus fruits, berries, bananas, guava, peaches, strawberries, peaches, grapes, pumpkin and green vegetables.

If I use Mascara, will it damage my eyelashes?
A: Not unless poorly stored and quality mascara is used. Infections will definitely put your eyelashes at risk. But use of mascara is not a problem. However, not taking off the makeup can lead to dried mascara on the lash roots, making them brittle, more at risk of injury. Waterproof mascara has been reported to be especially harsh to eyelashes. 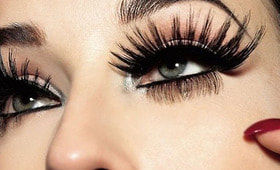 I am told I have madarosis. What is that?
A: Madarosis means loss of eyelashes or eyebrows or both. It is derived from the Greek word “madao” which means “to fall off”. Blepharitis (anterior blepharitis is caused by seborrheic changes or staphylococcal infections and posterior blepharitis is caused by inflammation of the meibomion glands, also called meibomionitis) may be one of the causes of madarosis. Other causes include seborrheic dermatitis and psoriasis.

Can drugs cause madarosis?
A: A number of prescribed medications are implicated in the loss of eyelashes and eyebrows: chemotherapy drugs, some antihypertensive medications, some anti-cholesterol drugs.

What diseases can cause madarosis?
A: The list is long and includes alopecia, acne rosacea, allergies, malnutrition, follicular mucinosis, metabolic diseases, mitochondrial myopathies, HIV infections, cutaneous sarcoidosis among others. An important cause of loss of eyelashes is inflammation or malignancy. It is important to have a specialist examine you to ensure you do not have one of these conditions, especially if you are losing lashes in one particular area of one eyelid.

What are possible treatments for madarosis?
A: This can range from control of local inflammation along the eyelids and eyelash roots, to treatment of pulling of lashes (trichotillomania). Identification of any agents causing allergies is important.

How quickly do eyelashes grow?
A: Eyelash growth is estimated to be about 0.05 mm per day and a single lash will grow for five to six months before falling out. ​

I have been told I have poliosis of the eyelashes. What is that?
A: Poliosis comes from the Greek word “pilios” which means gray. Patients with poliosis have decreased levels of melanin in the roots of the affected hair follicles. Poliosis can affect hair on the scalp, eyebrows eyelashes or other parts of the body. Stress does NOT cause poliosis contrary to common belief. Poliosis is often genetic and may be related to autoimmune diseases like vitiligo. It is also seen with alopecia areata, piebaldism (white hair above the forehead together with discoloured forehead skin), Vogt-Koyanagi-Harada disease, and Waardenburg syndrome. ​ 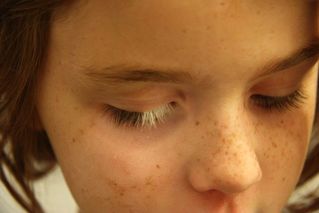 Is Latisse a good treatment if I want thicker and longer eyelashes?
A: Latisse contains Bimatoprost which is normally used to treat glaucoma. It also has the effect of enhancing lash growth when applied to the roots of the lashes. Rarely, patients may be sensitive to the medication, in which case it should not be used. You can read up on Latisse HERE. ​
"I had a excellent eye lift done by Dr. Patel. He knows what he is doing and is very pleasant. Dr.Patel was easy to get an appointment and he works with you. The office staff was very pleasant and made you feel calm."  D. Gull Highly recommended for eye lift surgery - Salt Lake City, UT