What is a pterygium?

​Pterygium refers to any wing-like triangular membrane occurring in the neck, eyes, knees, elbows, ankles or digits. The term comes from the Greek word pterygion meaning "little wing". From this was derived the Latin "pteryx" which means "winged one". First recorded use was 1562.

Pterygium (pronounced tur-IJ-ee-um) is a growth on the cornea (the clear front window of the eye) and the conjunctiva - the thin, filmy membrane that covers the white part of your eye (sclera).  These growths are caused by dry eye, exposure to wind and dust, smoke, heat (industrial workers who work in furnaces, or welders) and UV (ultra-violet) exposure. For this reason, a pterygium is often called "a surfer's eye."
​
A pterigium usually grows on the nasal side of the eye, but can also grow on the lateral side and, in some patients, tends to be so extensive as to seem like it is growing from all directions! The reason why it is most often seen on the nasal aspect is thought to be because light reflects from the nose onto this surface and also because light from the lateral aspect passes through the cornea and is focused onto this area! In other words, this area gets more sun damage (and wind damage) than the lateral side.

Pterygia are more common in men than ladies, and are seen more often the closer one is to the equator or to sunny and windy climates. 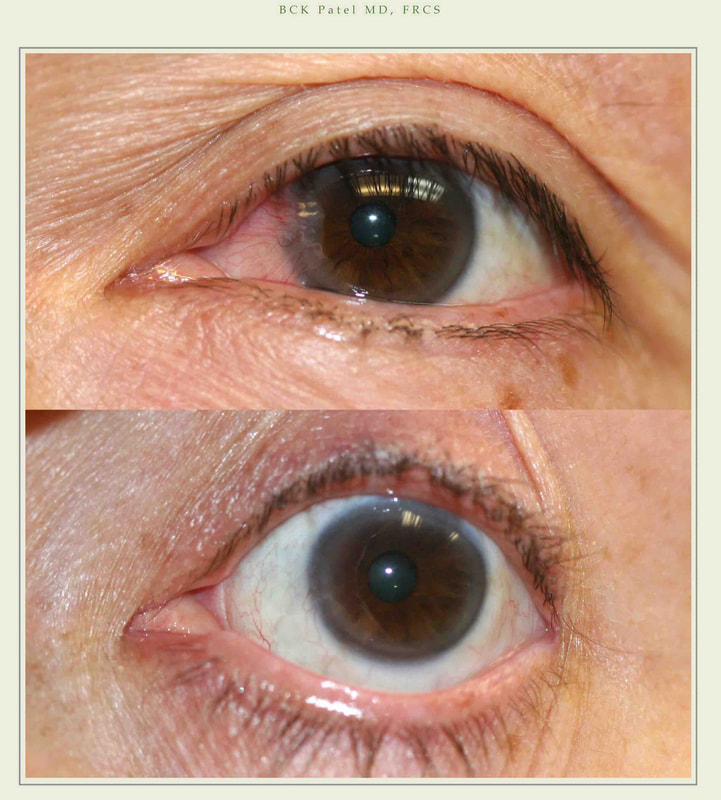 What symptoms does a pterygium cause?

In the early stages, pterygia may not cause any problems other than being visible as a red, elevated growth, oftenon the inner aspect of the white part of the eye. As they progress, patients may develop, increased redness, dryness, irritation and blurry or fluctuating vision. Patients who wear contact lenses may have difficulty comfortably wearing the lens.

Pterygium in the conjunctiva is characterized by elastotic degeneration of collagen (actinic elastosis[12]) and fibrovascular proliferation. It has an advancing portion called the head of the pterygium, which is connected to the main body of the pterygium by the neck. Sometimes a line of iron deposition can be seen adjacent to the head of the pterygium called Stocker's line. The location of the line can give an indication of the pattern of growth.
The predominance of pterygia on the nasal side is possibly a result of the sun's rays passing laterally through the cornea, where it undergoes refraction and becomes focused on the limbic area. Sunlight passes unobstructed from the lateral side of the eye, focusing on the medial limbus after passing through the cornea. On the contralateral (medial) side, however, the shadow of the nose medially reduces the intensity of sunlight focused on the lateral/temporal limbus.[9]
Some research also suggests a genetic predisposition due to an expression of vimentin, which indicates cellular migration by the keratoblasts embryological development, which are the cells that give rise to the layers of the cornea. Supporting this fact is the congenital pterygium, in which pterygium is seen in infants.[13] These cells also exhibit an increased P53 expression likely due to a deficit in the tumor suppressor gene. These indications give the impression of a migrating limbus because the cellular origin of the pterygium is actually initiated by the limbal epithelium.[14]
The pterygium is composed of several segments:
"Well, the last time I had a picture taken I could hardly see my eyes because of the weight of heavy eyelid. Then I paid attention to how I was actually using my eyes and I really noticed when I was looking at anything especially the computer I was straining my forehead to see better. Since I have had it done I no longer have to lift the forehead and tilt my head to see. It is amazing! I love..."  D. Rock  63 Yrs Old with Fat Droopy Eyes - Salt Lake City, UT

what surgical approach is used to remove and repair a pterygium?

"I had to have pterygium surgery three times on my right eye and each time I had it grow back and left me with scarring and double vision. Dr. I am glad my doctor finally called Dr. Patel and discussed my case with him. Dr. Patel agreed to see me and he fixed me in one go! It was a long operation but worth every minute of it. I have no double vision and my eye actually looks white finally." T. Rodriguez. Highly recommended for pterygium surgery - Salt Lake City & Saint George, UT 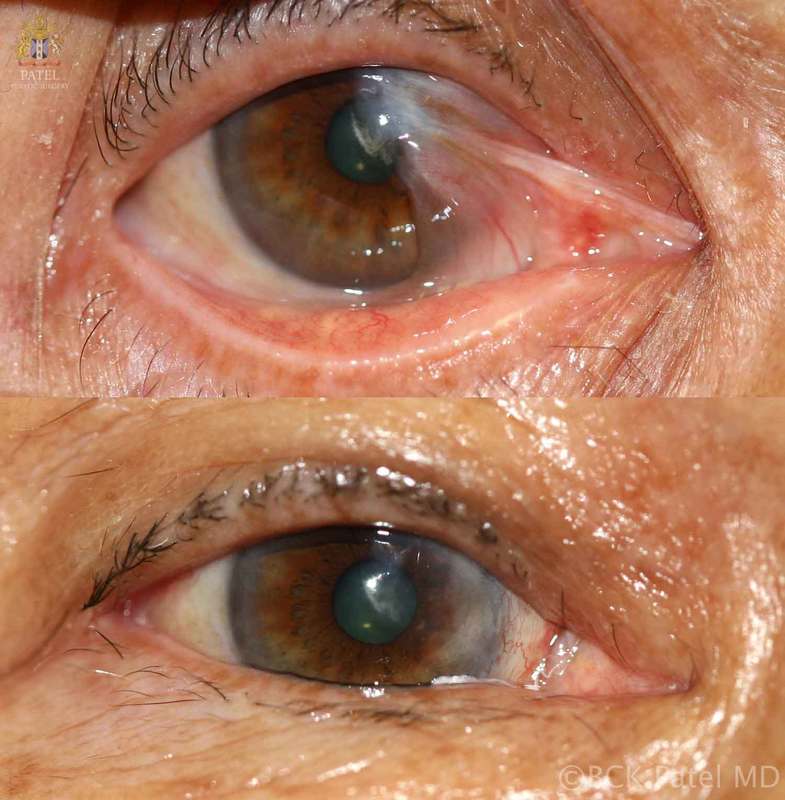 Facts You should know

Often, patients will have a pterygium on one side which we will operate upon and either a small pterygium or a pingueculum on the other eye. All of these do not need surgery. If you begin to protect your eye from ultraviolet light and reduce dryness and direct heat injury to the eye (work, play, etc), you can slow down the growth of these pingueculae. If you do not have any symptoms and the growth is not distorting the cornea, there is no need to undergo surgery.

Will my pterygium surgery be covered by Insurance?

Most insurances cover the surgical operation when it is performed for the appropriate reasons. If your insurance requires the submission of your history, findings and photographs to get pre-approval, we will ensure we do this.

How long does it take to get preauthorization from my insurance company?

Preauthorization may take four to six weeks from the time of submission of your information to the insurance company: we don’t have control over this, unfortunately.

How we used to remove and repair pterygia with sutures: of historical interest...... 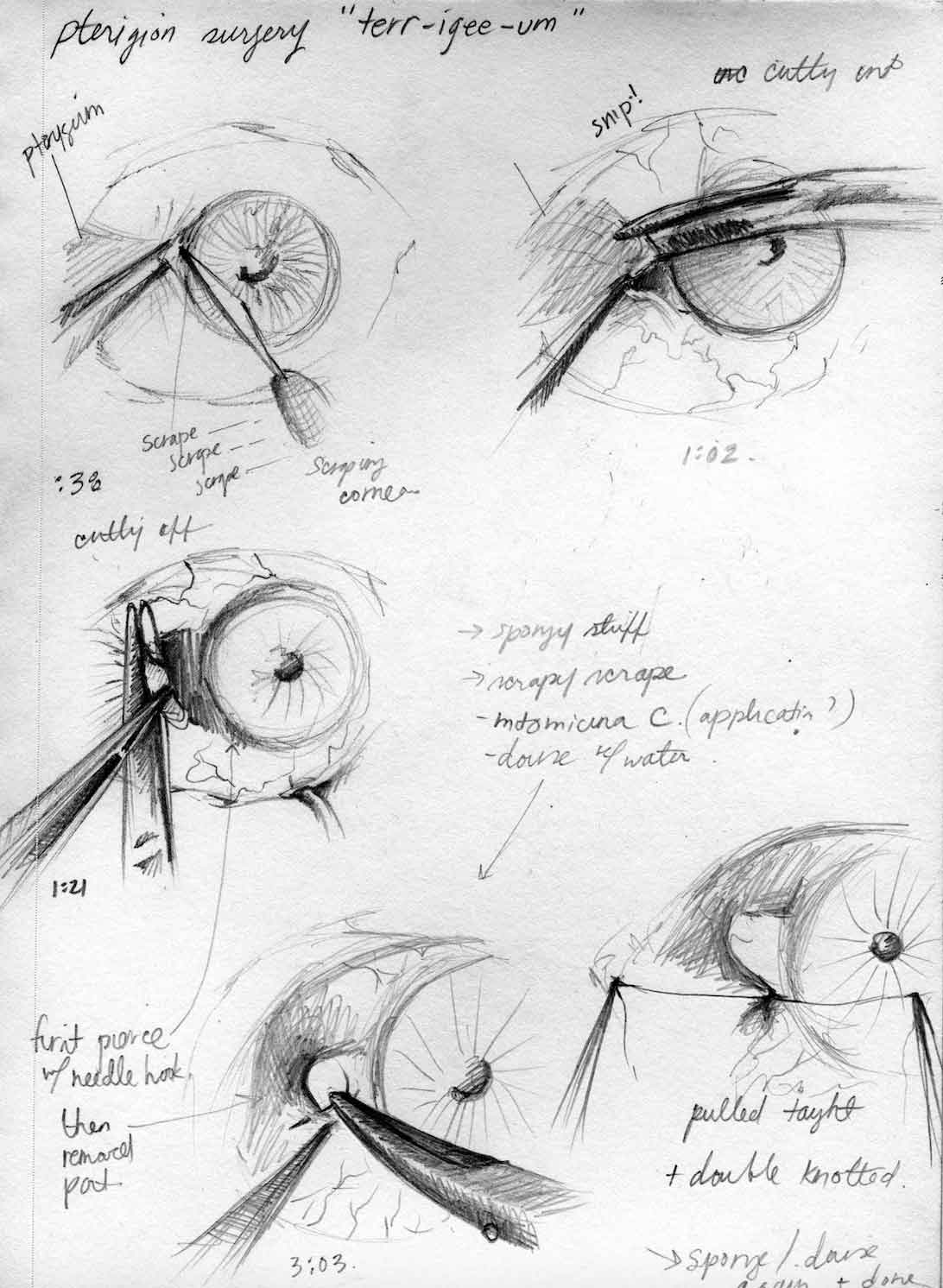 We used to use 9-0 and 10-0 sutures to repair the defects and hold conjunctival grafts in place: whereas successful, the inflammation incited by the sutures meant that there would be prolonged redness and increased the risk of recurrence of the pterygium

What kind of results can I expect? 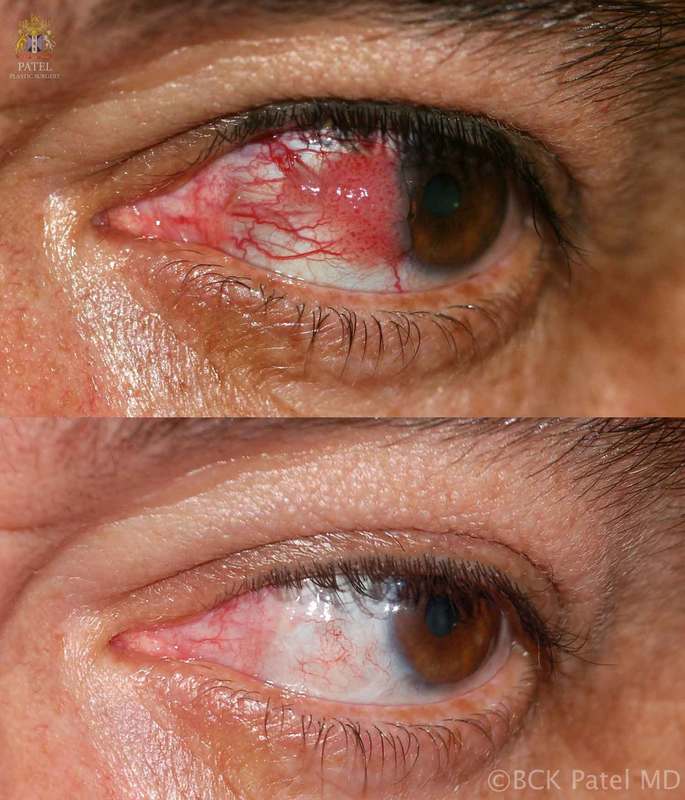 A large carcinoma-in-situ imitating a pterygium with large feeder vessels: treatment was with resection, cryotherapy and a large conjunctival graft with careful followup.
"Dr.Patel such a wonderful person...trust worthy, making u feel like family, included his staff members. Made my worries go away with there caring ways. God bless them. He truly make a wonderful job...it seem like a miracle. Dr. Patel makes magic happen." -Vitals.com Visitor Review